After a really crappy 1:45 hrs treadmill run, some rest, and a pastrami sandwich lunch, it was time for some cross training. Toronto style!

The Edge Walk at the CN Tower sounds just like the perfect thing for that. Especially since we have perfect weather for that today!

Walking some 350 meters above ground with no railing or anything like that. Well, a safety harness to be fair. But since we already have to wear the harness, might as well have some fun with it. Leaning out on your tippy toes and leaning backwards over the edge and shenanigans of that sort.

After being suited up, harnessed, triple checked (they do take safety very serious!), shuttled up, and given some final dos and don'ts, Elina, Rodrigo, and I stepped out on the ledge - err edge, whatever.

Out of our little group of three (not counting our guide Aussie Joanne) Elina, hailing from Israel and living in Toronto for 11 years now, was by far the most courageous. I bet she was some sort of Israeli special forces commando or shit like that. When Joanne told us about the first activity - Toes over Toronto - she was first and almost ran to the edge. I thought she was going to jump! (Which would have been pointless given the harness.) Rodrigo, Elina's just boyfriend, part-time boyfriend, or soon to be boyfriend, or something like that, hailing from Brazil and living in Amsterdam, was actually kind of chicken. At first anyway. He soon got the hang of it and was fine. Really nice guy in any case.

So... Toes over Toronto, eh? Pretty much exactly what it sounds like. Walk to the edge, put the toes of one foot over the edge and then the toes of the other foot. Then remove your hands from the rope of the safety harness. Easy right? Fuck no!

As endurance athletes we are quite used to the concept of "mind over body". This was more of a case of "body over mind". Certainly not a strenuous task. Just two tiny, short steps. Except my mind was screaming "NO! WTF?! DO NOT DO THAT! ARE YOU FUCKING CRAZY?" It took all I had to put one foot forward. It was just like my other foot was paralyzed. Eventually I managed to have both set of toes over the edge - sort of - and very briefly let go of the rope. After a split second that felt like an eternity I nearly jumped back.

The next activity was "Lean Backwards". Sit down in the harness, walk backwards until heels are well over the edge, straighten legs, lean fully backwards, let go of rope, and enjoy. Strangely though this is much easier than toes over. Probably you don't look down. This was fun from the start.

For the record, I did 'toes over' several more times when the opportunity allowed for it. Just to prove I could do it. It really does take some time to get used to height. Even Joanne who has been a guide for over a year at one point went 'uhhh' as she was pointing out the sights and mentioned that every now and so often she gets caught of guard by the height. And she was standing and walking right on the edge all the time.

Speaking of sights... The weather today was sunny and crisp and almost no wind. Absolutely perfect conditions. The ticket includes a video of the whole walk which we have on DVD and I will post later. It also includes two pictures in printed format of which I took a picture (I know, very analog) and attached to this post. I also got the USB key with all the pictures Joanne took and some of which I'll post later as well.

Other activities were "Edge Walk" were we were literally walking right on the edge - hands off the rope! (yeah, not for long) - and walking backwards which was kinda lame.

In the end it was a totally awesome and kind of unnatural experience. Now I am chilling with a local (the other attached picture). 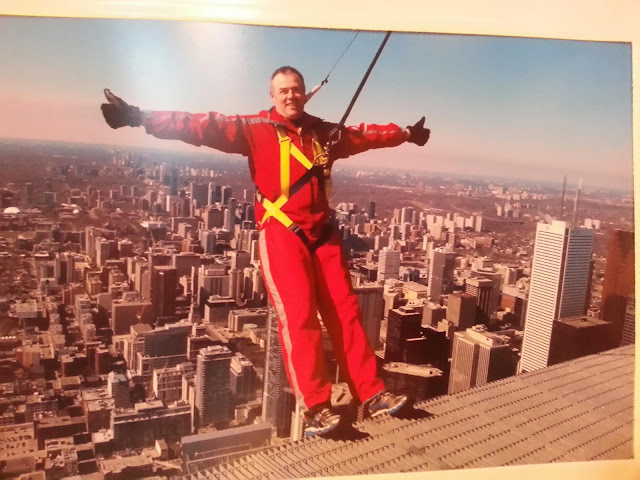 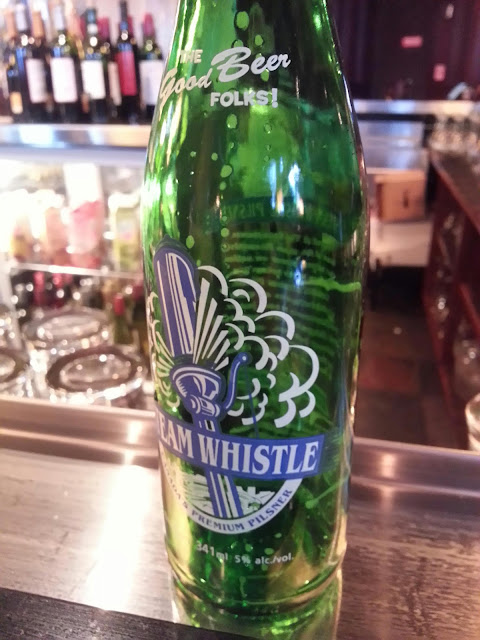 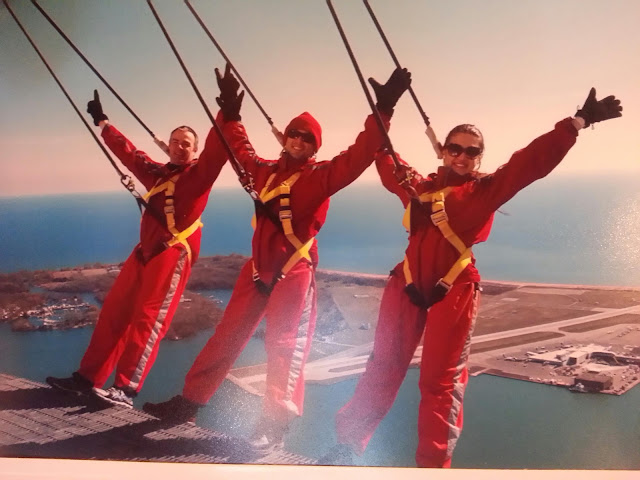