The title is in reference to this very late Ironman Canada race report, but it also nicely sums up my result: I did finish my first Ironman race on 28-Aug-2011 in 12 hours and 42 minutes.
Am I happy with this result?
Good question - one I have asked myself quite a bit over the last few months. I know I ought to be. In all reality a sub-13 hour first time Ironman finish is a respectable result. Also, it was incredibly hot that day; in Penticton the forecast was for a high of 33°C and that makes it way hotter in the Similkameen Valley and to about 7-gazillion degrees running along Skaha lake in the mid afternoon with nowhere to hide.
And yes, in many ways I am really happy. I finished reasonably healthy and in good spirits. And after all, sub-13 was my "B" goal. With my "C" goal being to simply finish. The "A" goal was to finish in sub-12 hours.
One can, and perhaps should, argue though that I set my goals too soft. The A-goal should be nearly unattainable. That is, only if everything goes absolutely perfect should I be able to reach that goal. And with that said, it should have been 11 hours, with a B-goal of 12 or 12.5 hours.
But I am getting older, "of a certain age" per se, and I want to enjoy this sport still for a very long time to come. At the Oliver Half Iron race this year I promised myself to stop creating these kinds of goal-pressures for myself and just race for the fun of it. This promise, as it turns out, seems to be a work in progress...
So in all honesty, I am a little disappointed in the final time and know that I could, and should, have done better. Sub-12 is totally attainable for me. I know where I made the mistakes and ended up falling short. And with that I take comfort that this was a great learning experience and will serve me well in my next iron distance race.
Heck, it wasn’t just a great learning experience, it was a great experience - period!
Here now how it all played out. 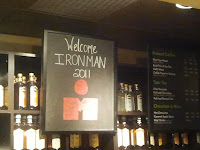 Lawrence and I arrived in Penticton on Tuesday evening to be there nice and early before the race to acclimatize and get all the pre-race stuff done without any stress. On Wednesday we met up with our training buddy Gen and went to listen to Jordan Rapp speak at the Penticton Wholefoods. Thursday was race registration, Friday the athletes meeting, and Saturday bike check-in. Doesn't sound like much, but add in a little bit of training, cooking, and numerous trips to the local Starbucks and we were constantly on the go it seemed. 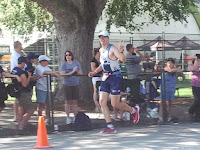 The first 5k of the run I was doing really well. Perhaps even too well as my average pace was slightly faster than then planned-for 6min/km. This quickly corrected itself in the next 5k. Even though, at the 10k mark I was bang-on at just over an hour. From here on things started to unravel. My foot was killing me and that not enough, now also my hamstring started to object – really no surprise there. Add in the no-shade-heat along Skaha Lake and I was just not in a good way at all.
As mentioned earlier, I was planning to walk through all the aid stations, but after some 20k (now I was at 2:16 hours and clearly bleeding time) I walked all the uphills as well – the real and the perceived ones. At 30k I was at 3:33 hours and already nearly a half hour behind schedule on the account of walking just randomly. At 40k I was at 4:43 hours but now with the end near something resembling a second wind had kicked in and I was pushing it again. Or whatever passes at this time for ‘pushing it’.
Although I finished the run in a time that I would rather not advertise and the various pains were really annoying, in retrospect, there were so many great moments too:
See, the one thing I really wanted, was to hear the incomparable Steve King announcing exactly those words when I cross the finish line. Except when I came in Steve was on break and that iconic line was not being used as much as it used to be in previous years. Lawrence did a great job making up for it though!
Result: 4:57:22 – Ouch!
Lessons learned: hmm not sure. I think that much of this falling apart can be blamed on all the events preceding it. Clearly the one thing that I could and should improve in is mental toughness. And overall I need to do a much better job at weight management. I started the race with just under 190 lbs or so and I should really be at least 10 lbs less than that for an event like this.
In a nutshell: can’t wait to do another one! Challenge Roth 2013!
Special Thanks:
First and foremost, I owe a huge thanks and debt of gratitude to my wife Esthi for her infinite patience and generosity – both with my time and financially the way I emptied money into the black hole that is first-time-Ironman-racing. Love you lots!
Naming all the others that so much contributed to this awesome experience would be way too much so I just use short form here.
Coach Lara, Rand, Danny, Leigh, Heather, Eric, Vittoria, Lorena, Amanda, Ben and all other Right Shoe athletes, Keith from NSA, Jeremy, Doug, Murray, Mike and all other Speed Theory Vancouver peeps, Shaun fromPacific Rim Multisport, KC and Janka and the other coaches from Fastlanes, Peter “Seahiker”, Jason, Darryl, Sarah and Matthew and all the other athletes who have made training so much fun, Timberly and Laura for keeping me well aligned, and all my friends who had to listen to me tri-geeking way too often and still kept a smile on – thank you all! I could have done it without you and I wouldn’t have wanted to in any case.
Notably absent from the list above are my good friends and training partners Gen, Lawrence, and Esther. A very special thanks goes to you for sticking with me through all my random complaints and for not giving up on me but pushing me on instead. I am very happy and honoured that you trained with me and shared your experiences and advice along the way. You guys are awesome.
Posted by klaus at 3:24 PM