Esther and I watched Game 7 of the Stanley Cup Finals between the Canucks and the Bruins at Jimmys Taphouse just across the street from us. Jimmys is a bit like our Cheers. It is close by with a generally friendly crowd, nice wait staff and bartenders, and the manager is a nice guy too; and like Cheers we have come to known many of the other regulars as well.

Due to Jimmys location they are always packed on Game nights and on Game 7 of the Stanley Cup Finals of course even more so. Ruben, the manager, promised that he'll try to keep us a seat available for when we come after work. This of course is nearly an impossible task with the amount of people streaming through on a day and night like that. The game was on a Wednesday and I decided to start work really early to be able to leave early as well. So I managed to be at Jimmys in the early afternoon and get myself a nice spot at the bar. There I had a late lunch (I worked through lunch to make sure I get everything done in time) and generally passed time to read the various news paper takes on the game today.

Just before the game started at 5:00 PM, I managed to get another seat next to me for Esther who was on the way from her shop. She made it just in time for national anthems and the start of the game. The atmosphere was amazing! Everyone was so into it and we all were - of course - feverishly hoping for a strong Canucks performance. While it was a really good Game, the Bruins well outplayed Vancouver which in the end was reflected in the score of 4-0 for the Boston.

At the end of the game we watched the Boston victory celebrations and the post game interviews as we finished our drinks. The next thing we hear is a few loud bangs as something outside exploded. Looking out the windows we saw riot police slowly moving rioters down Homer Street toward Robson. Clearly there was no going out of Jimmys now as we had not the slightest appetite to be wrapped up in that chaos. So we stayed inside and watched it. Friends of our who were watching the game at a home further down Homer Street texted us that we should come to meet them or they would come to meet us for some last drinks of the night. We told them that this would probably not be such a good idea (or even possible) and this is when they too noticed what was going on.

There is really no need for me to go further into the details of the riot as it has been covered in great detail by all the new media already. As soon as feasible we just went home and to bed as it was a "school night" after all and we both had to work the next day.

I do however want to post here the account from one person on the inside of it. A friend of mine works for the VPD and obviously was on shift that night. The next day I sent him an email to ask if he is alright and this is what he responded with: (re-published here with his permission)


Wow what a night! I have seen many clips of things on the news now and it was just as bad as it looked. We were seriously outnumbered, as a huge number of people had come into Vancouver with the intent of having a riot.

Before the game was over we kept encountering roaming groups of people who were unaware of what the score was in the game, and openly admitted they had come to town for the riot that would follow.  It's shocking that there is an idiot subculture that exists only to cause damage, pain and suffering to others. Almost as bad are those who stand and watch, unknowingly provide shelter behind which vandals can run and hide. A number of police officers were injured, but thankfully none seriously. Several police cars were set on fire, others overturned, and many with all the windows smashed out – likely a couple of dozen no longer driveable as a result. Close to 2 dozen privately owned vehicles were set on fire, and countless damaged from hooligans smashing windows and jumping on the vehicles. The windows of many stores were smashed and the store looted.


As most Vancouver members were already working, we called for reinforcements and got busloads of police coming in from Surrey and other RCMP detachments, as well as Port Moody, New Westminster, West Vancouver, Delta and Abbotsford.


Our group of 4 saw one [city name removed] resident carrying a street barricade up the stairs to the library and smash the window. We quickly moved in and caught him, only to then the surrounded by the crowds jeering that we should let him go. Moments later a metal piece of the same barricade (with sharp edges and weighing 15+ lbs) came flying through the air, striking a woman (who had moments earlier was shouting at us for police brutality) in the head. In the confusion we managed to get ourselves, the prisoner and the injured woman out of the crowd to safety. She went off to the hospital but is lucky to be alive.


What followed were several hours of tactics and tear gas trying to reclaim the downtown core. With squads in full riot gear with shields blocking the side streets, we would fire tear gas at the crowds and charge towards them to drive them out of the downtown core. Eventually they all dispersed, and then the challenge was to keep looting to a minimum until the store fronts could be boarded up.


I was exhausted when I got home but glad to have been there to experience things first hand. It was a honour to stand shoulder-to-shoulder with my brothers and sisters in blue tonight trying to keep our city safe.

The public backlash against the rioters in the following days and weeks was nothing short of astounding either. With pretty much everyone now carrying some form photo or video camera, there is just not as much hiding - or forgetting. Except that the criminals rioting and looting seemed to have not been aware of that.

I also don't want to go into a great discourse on how these criminals where treated in the aftermath, but my point of view is this:


I hope that this form of online mob behavior has now largely stopped as well!

What I found truly amazing though is how the city and the true Canucks and hockey fans came together over the next few days, starting on the very next day after the riot, to help clean up the city and leave friendly notes on the boarded up windows. That showed the true spirit of the people of Vancouver - not that of a handful of professional rioters and lots of drunken idiots.

Some impressions from my way to work on Thursday: 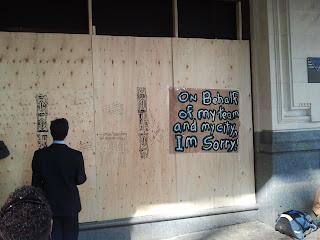 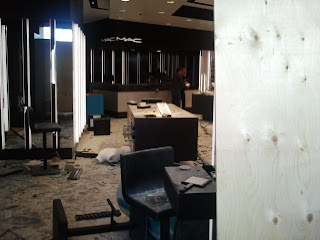 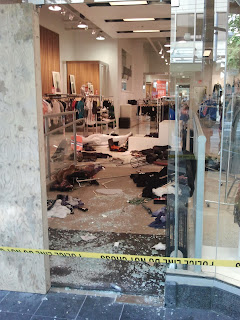 Then over the next few days, this started to emerge: 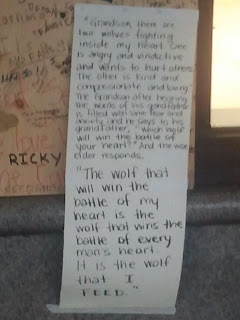 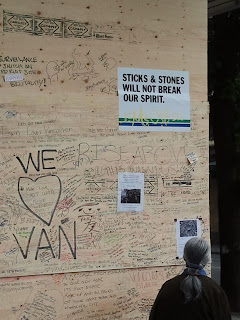 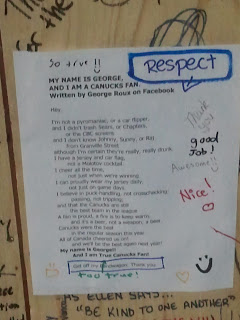 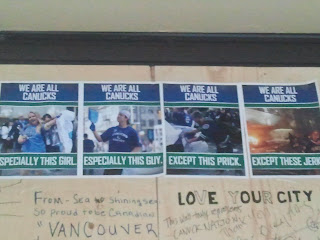 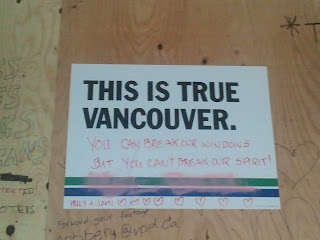 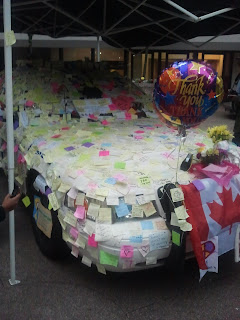 The last picture is one of a police cruiser that initially was parked on the street the next day and someone placed a post-it note of thanks on it. In no time lots of other people did the same. When the cop/s came back to the vehicle they did not want to drive it away for fear of losing the notes. Eventually it was moved to the plaza in front of Sears for a a few days and covered in notes. When I took this picture I asked the cops who were nearby how long this would stay there. He told me that they would need to move it that night "as you can imagine we are a little short on drivable cars..."

The boards that covered up the windows at The Bay will be preserved by the city and the police made sure that they photographed this cruiser in a lot of detail and they will preserve all the notes as well.

Thanks for stopping by.
Posted by klaus at 9:58 AM