And now it is only 10 weeks left to Oliver. And I tweaked my calf in a bad way. Not what I needed but I hope that I can get it sorted in week 13 - a recovery week.

We also have the Pacific Rim Multisport Spring Training Camp in Osoyoos coming up from May 13 until May 16. Now this is less than 7 weeks away. Ohlalalala! But I am totally looking forward to it! Should be hard work but a lot of fun.

Theme of this week: I am pissed with my calf! Aarrgh!

Monday: Rest day as usual and nothing exciting to report. As mentioned, I did OK in the Harry's Spring Run Off the day before so I thoroughly enjoyed the rest day.

Tuesday: Had to work early again and and went swimming at the Y in the afternoon just before going to meet The Right Shoe group for a Beach Circuit workout.

Wednesday: Again went to work early and hit the Y for my strength training over lunch. And just like the previous week I did 90 min on the trainer in the evening followed by a 20 min run on the treadmill. Since it was reasonably warm that day I went for the first time this year on the trainer in a tri-suit. I can tell you that my backside is not ready for 90 min with just a hint of a chamois yet! (ouch!)

Thursday: The Wednesday strength followed by the brick tends to leave me pretty sore. Combine that with a very much sub-optimal sleep and you can imagine where my intentions to go swimming with the Dolphins went... yep, not happening. Decided to do the Friday run instead in the afternoon before going to The Right Shoe spin class. The run included drills and strides and two sets of 2 lateral drills after a good warm up. I ran from our place along the seawall to sunset beach nice and easy - a good 20 minutes. Already during that warm-up I felt really sluggish and sore. Did the D+S as well as the first set of lateral cross-overs and side-shuffles OK. Just when I took the first few steps of the second cross-overs I got a sharp pain in my right calf. At first I thought it was the Achilles tendon but then I noticed that it was a bit higher. Just on the inner and lower part of the calf muscle. Really painful! So I kinda hobble-jogged home and started icing it right away and took some ibuprofen. In the evening I took my bike to the spin class but took both the commute and the spin super easy.

Friday: Strongly modified strength session with no legs but a lot of foam rolling instead. Naturally also more icing (not the sweet kind mind you!) and ibuprofen. And did an hour swim. Evening was off as Esther and I went to La Terrazza for dinner. That dinner plus an already heavy Dim Sum lunch at Imperial Restaurant may also account for the less than stellar weight and body fat percentage numbers below... well along with another week of lacking dietary discipline in general.

Saturday: 4+ hour bike ride that was mostly dry. A real treat and a great ride. Calf felt excellent throughout the entire ride. Even saw an eagle at the pit stop at Iona Beach: 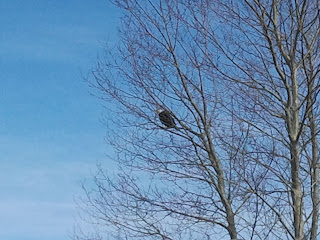 Although my buddies did not appreciate my photographic skills and my needs to immediately tweet the picture as much as I did.
Sunday: Went to the Y at 9:00 AM for an hour swim and met up with my buddy Gen at 10:00 AM for 1.5 hours of water running. Read that again: 1.5 hours of water running. Thank god I had company! No way I would have been able to do that on my own. About as mind numbing as 4.5 hours on the trainer (not that I have ever done that!).

Upcoming week, as mentioned, is recovery week. I plan on doing my calf some good and going really easy and treating it just right so that next week I am back on normal training.

Hey, thanks as always for checking in. I'll promise that in the coming week I'll try a little harder to come up with some more interesting posts than these fairly lame WIRs.
Cheers!
Posted by klaus at 3:06 PM